You are here: Home / Crystals / Indonesian Pink Lace Agate 101: Everything You Need To Know 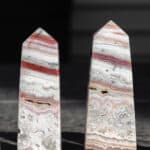 Learn the basics about Pink Lace Agate from Indonesian and its properties, the chakras and astrological signs it is connected to, and the possible benefits you may experience by working with this pretty crystal.

This post may contain affiliate links. See our Disclosure Statement for more information. The information in this post is not meant to diagnose, treat or cure any psychological or physical ailments.

It’s a more recent find and growing very quickly in popularity because of its gentle, feminine energy, beautiful shades of pink and white, and the common occurrence of druzy pockets.

Pink lace agate is in high demand, but due to the fact it has only been found in one location, there is limited quantities. This has resulted in an overall higher price range than other more common crystals.

What Is Pink Lace Agate?

It is most commonly found in shades of pink and white, though can sometimes also have shades of yellow, orange, red and gray.

Its hardness is 7 on the Mohs Hardness Scale.

While more rare, pink lace agate is usually available in forms of polished crystals such as towers and points, spheres and larger carvings. It is not found in raw form as often.

Pink lace agate is more rare and can only be found in Indonesia.

Because pink lace agate is a newer find, its spiritual properties are still being discovered.

It may align more closely to the heart and sacral chakras, similar to other pink agates.

At this time, it can be assumed that pink lace agate is associated with all of the zodiac signs.

While the spiritual properties of pink lace agate are still being discovered, some benefits you may experience from this crystal are:

How To Care For Pink Lace Agate

Recharge pink lace agate by placing in sunlight for just a few hours or moonlight, or by using other crystals, like selenite. You can also remove any negative energy by smoke cleansing your crystals with incense.

Where To Buy Pink Lace Agate

Crystals should only be purchased from reliable sellers who source their products consciously. There are many fake crystals on the market and unethical practices in sourcing these stones.

We often have pink lace agate that has been sourced directly from legitimate Indonesian wholesalers, available for sale in our Etsy store, with new options added as they become available.

You can also find us on Tiktok where we hold really fun live sales. 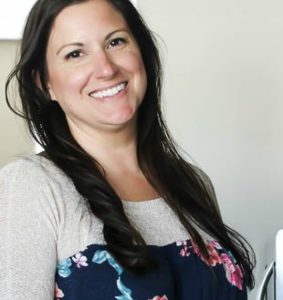 Welcome to Sweet Honey Life, a lifestyle blog designed to help women age 40 and beyond live a sweet, golden life! Here you will find fun, useful information about beauty, fashion, fitness, family, home, and travel. Grab a cup of coffee, or tea (chai is my fav) and stay awhile! Read more…