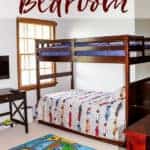 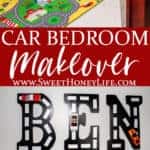 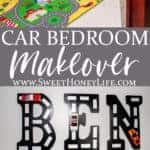 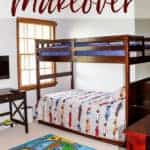 This Car Bedroom Makeover post will walk you through step-by-step how we transformed our son’s very outdated, peach bedroom into a car-lovers dream.

When I was pregnant with my youngest son, Benjamin, I became obsessed with elephants. I mean, I’ve always liked elephants, but as soon as I came across the dark blue elephant crib set with a mama and baby elephant, I knew his room had to be elephants.

It went from his room, to his stuffed animals and toys, to his clothing. There is even a sweet connection with the book “Horton Hears a Who“ and the fact that Ben was born with dwarfism – for “A person’s a person, no matter how small.”

It was cute and sentimental and I absolutely loved it for the 3-4 years before we moved. But with that move Benjamin, now 5, had other plans.

He has loved cars since day one. I wasn’t sure if it was just a phase or if he’d outgrow it, but with time his love for cars, especially race cars, has only grown. It was time to update his sweet, cute baby bedroom into a cool big kid’s car bedroom.

Our new house has 4 bedrooms upstairs. One master bedroom at the top left of the steps, one bedroom to the right of the steps, and 2 on either side at the end of a hallway.

We decided that our sons’ bedrooms would be the 2 rooms at the end of the hallway. One was purplish-gray and the other was a very outdated peach color. I actually found the old can of peach paint in the basement and the date written on it was 2002.

Benjamin ended up with the peach room. In addition to the color of the walls, there were several other areas to improve, including switching out the fan, brass door knobs, metal blinds, light switches, and outlets, as well as furniture and decor to add.

The first job to tackle was to get the room painted as soon as possible. I love the way that paint alone can make an entire room feel completely different.

Knowing that Ben would want a car-themed room, I first found a race car quilt set for his bed on Amazon. It’s a double sided quilt, but the side with the race cars is gray with different colored cars on it and he likes this side best. It also comes in navy blue.

I decided to paint the room a neutral, light gray to match the quilt and make it so that if/when he’s ever over cars, I won’t need to repaint the room. We’ve also decided to keep as much of the natural wood in the house as possible and the light gray looks really nice with the color of the wood.

The paint that I used is Tornado by PPG Paint. It took 2 coats to completely cover the peach.

To save money, we kept the mahogany-colored dresser that we had bought years ago with his crib and found a bunk bed on Wayfair that matched it. We wanted a bunk bed for Ben’s room so that his brother, Jaxon, could use the top bunk and have sleepovers in there.

We just use the sheets and comforter that we already had from Jaxon’s old twin bed on the top bunk. It’s a simple dark blue comforter and looks okay with the different colors in Ben’s car comforter.

The mattress is a medium firm foam mattress that I also got from Amazon. This was the first time we tried a bed-in-a-box type of mattress and were skeptical when it arrived so flattened and rolled up.

It sprung back nicely and is fairly firm. We have since ordered similar mattresses for our older son and for ourselves.

I also ordered a protective mattress cover that doesn’t make any crinkling noises when you move. We also ended up ordering these for all of the beds in our house too.

There are drawers under the bunk bed that hold extra sheets, blankets, and pillowcases. The one downside to this bed is that the drawers are not actually on rails. They are just sitting on the floor and can be shifted right or left, leaving a bit of a gap either between them or on the edges.

There are also 3 drawers on the side of steps for the bed. I currently use these drawers to hold clothing that Ben does not yet fit into.

The table between the windows is actually a desk. We only had a narrow area in his room to squeeze in a desk and found this one on Wayfair in the color close his dresser and bed.

My fiancé mounted and set up the TV. It had to be mounted lower since there is a beam in between the windows right in the middle that would have prevented us from being able to run the wires inside the wall.

Once Ben needs a computer, he plans to make it so that the TV can also double as a computer monitor. Eventually we will add a chair and do something about the wires at the bottom.

I made Ben’s name in wood letters that were painted to look like a road. The process of painting the letters was pretty easy.

The letters that I bought in-store at Michael’s were already white so I placed scrap booking tape where I wanted the lines of the road to be.

Then, I painted the entire letter black. Once it was dry, I removed the tape and glued on 3 Hot Wheels cars.

I decided to combine the 2 best parts, since this was the only gas station lamp that I liked. We may eventually replace the lamp shade, as this one still is pretty shoddy around the inner top portion.

I found both the lamp and the mechanics tool box on a website called Summit Racing. The tool box is metal with wheels and actually rolls. Benjamin calls it his bank and keeps his coins and dollar bills inside of it for now.

I ordered the road rug from Amazon. It was only $39.71 when I bought it, but is currently $31.18 at the time of this publishing. Amazon prices fluctuate daily, so it may have changed again.

I had to use rug tape all the way around the edges to keep it in place or it bunches up right away. It’s but very thin and a nice addition to the room for Ben.

The car nightlight also came from Amazon, in a set of two. It comes on automatically when the room is dark.

It appears that this item is no longer available.

Other Updates To The Bedroom

The fan is by Home Decorator’s Collection that I ordered from Home Depot. The reason that we got this particular fan is because it can be controlled with a remote. With Ben having dwarfism, he can’t reach light switches without a stool or the pulls on a traditional fan at all.

The wood blinds are the shade Brandy from Levolor to match the wood trim. I order ours through Blindsgalore when they have their 50% off sale (they are pretty much always at least 45% off on that website). It’s by far the best price you can get on real wood Levolor blinds.

The bedroom door knobs were switched out from old, outdated brass knobs to antiqued bronze handles from Brinks. They can be found at some Walmart stores or Amazon. I bought the lever style handles, because they are easier for Ben to grab and open on his own.

Eventually we will also switch out the hinges.

The closet door knobs are from Amazon. They are “dummy” door knobs in that they don’t turn or have a latch. Ben can also easily open these because there is no need to turn while pulling.

The light switches and all of the outlets were all changed to white with white covers.

This is another angle of the final result. Ben is so happy with his room.

There is usually a stool in here for him to get on and off the bed or into his dresser drawers. And, of course, there are usually blankets hanging all around the bottom bunk for the most epic “fort.”

We keep his clothing in one of his closets, and toys in the other. Eventually I would like to have his closet set up so that he can easily access his clothing entirely on his own.

He has tons of drawer space for books and school necessities once he’s a little older, or we may put shelving in his second closet for easier access and organization.

I hope that you’ve enjoyed this car bedroom makeover and that you find it helpful when making your own car-themed bedroom.

If you have any questions about any of the items used for this car bedroom makeover, leave a comment or send me a message. I’ll do my best to answer them.

Welcome to Sweet Honey Life, a lifestyle blog designed to help women age 40 and beyond live a sweet, golden life! Here you will find fun, useful information about beauty, fashion, fitness, family, home, and travel. Grab a cup of coffee, or tea (chai is my fav) and stay awhile! Read more…